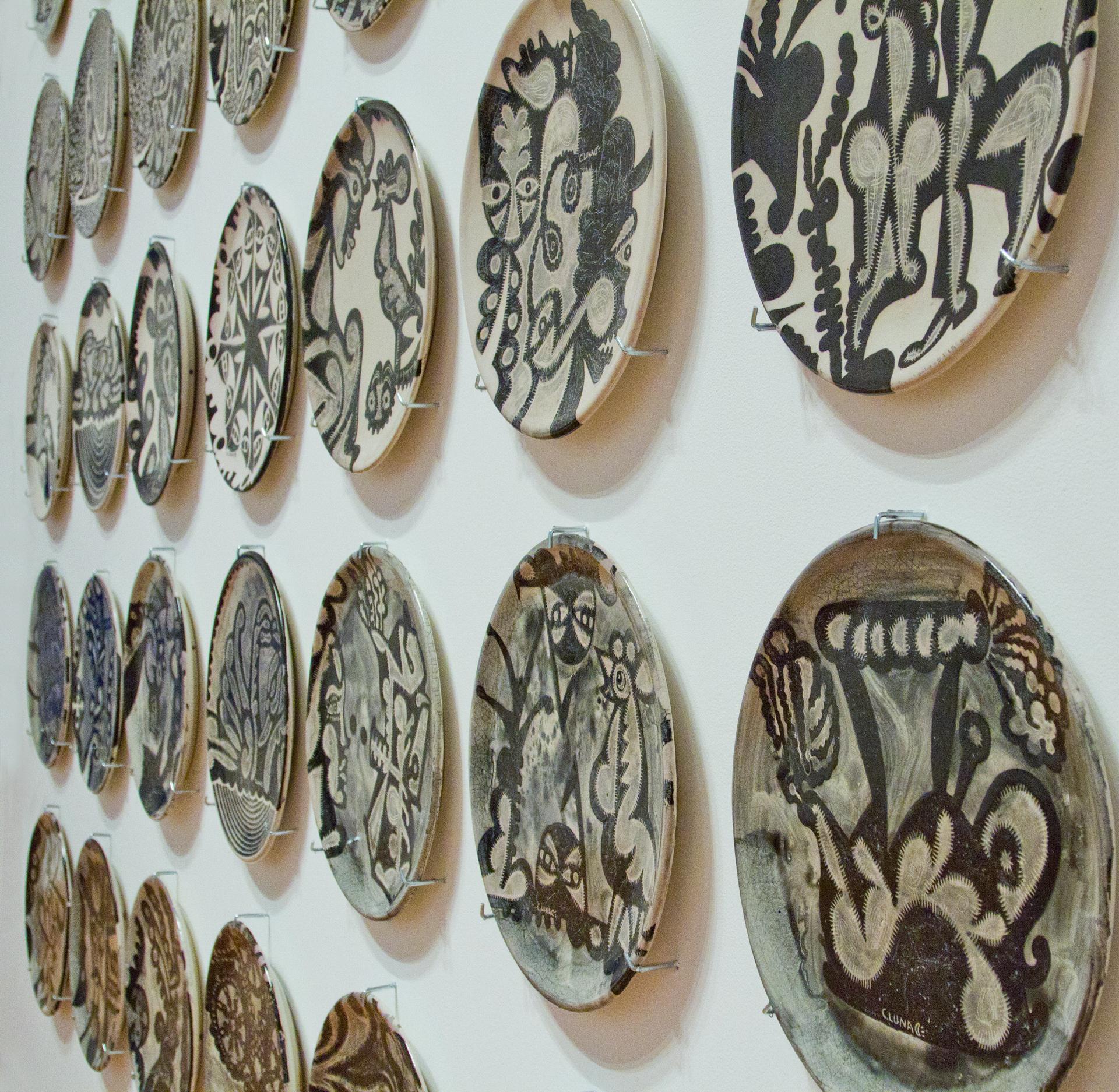 Carlos Luna has long been concerned with the passage of time and the persistence of memory in works that are now recognizable for their prodigious use of popular Cuban imagery, Caribbean symbols, and complex stylistic aesthetic. His Cuban identity takes on the characters, stories, music, and vitality of his recollections of the island’s past, while addressing key issues pertinent to his ten-year residency in Miami, Florida. One of the newest and most vibrant art cities in the United States, Miami is known for its own particular and complex stylistic aesthetic that is as influential to artists as they are to its establishment, as the most recognizable and typical of time and place. Undoubtedly, the work of Carlos Luna not only reflects his new home and its unique tropical overtones, but it is the perfect vehicle to describe his cultural memories with a relevant visual appeal. His work has become part of the unique environment of South Florida in a short period of time. Home to over 2.5 million people, over 50% of them foreign-born, and a Hispanic population of 66%, Miami Dade County is a thriving center for art and artists, especially from Latin America and the Caribbean. The diversity of their work, whether painting outside on the famous Wynwood Walls, or working in alternative spaces and collectives, and participating in museum and gallery exhibitions, becomes especially apparent and attractive for visitors who arrive en masse for the December art fairs, headlined by Art Basel Miami Beach. The local and international community recognizes something special in the Miami art scene and its artists: colorful and complex styles that range from the most cutting-edge installations to the renowned geometric abstraction associated with Venezuela and Argentina to Pop Art that seems to serve the South Beach image of fun and fantasy, and everything in between. There are artists who follow the trends and others who create their own. The December art fairs came to Miami because there was something different about the cultural participants and art’s community, and now the city has come into a life of its own beyond the week-long extravaganza, and the local artists are being recognized for their accomplishments and praised for their success as they reach beyond the county boundaries to join the global village. It is never easy to survive the art scene, anywhere, and the artists that do and remain true to their personal vision, are to be lauded for their tenacity and constant commitment to produce excellent work. No doubt, these success stories have less to do with the trends in Miami, and everything to do with the quality of an artist’s work and a personal vision.

Carlos Luna has never strayed from his strong work ethic and dedication to producing works that dialogue with his own cultural and traditional values as he brings them to life through a unique approach to the visualization of his world. Luna’s images capture his personal journey not only out of Cuba, but through daily life. Constantly exploring new technical processes, he applies many different methods for his production as he searches for a solution to express each new idea – ideas that emerge from long-term and short-term memories and activities – and finds the material that best meets his need to resolve any problems while inventing and re-inventing a symbolic repertoire as well. Although references to life in Cuba and Mexico (where he lived after leaving the island) abound, with each new series, he brings the present into play, always enlightened by his perceptions about the condition of man and how to create works relevant to humanity. He makes the transition from painting and drawing to sculpture and ceramics with a natural facility that allows a variety of new materials to be introduced: hand-made paper, metal plates, and now tapestry. The syncretization of materials, imagery, and symbols continues to inform his creative process, now with the additional influences that are part of life in Miami, further complicating his already complex inventory of graphic elements. The recognizable accumulation of signs and symbols, figurative motifs, abstract components, objects and hybrid designs combined with his stylistic and technical methods of heavy outlines and dense patterning rooted in a strong sense of graphic design result in surfaces that are as tactile physically as they are visually, and translate from material to material, time and place.

There is clearly an over-patterned, over-worked aspect to Luna’s work that is akin to a Baroque aesthetic, re-interpreted in contemporary terms in Miami’s Latinization. Miami is an exaggerated city, replete with the cultural trends from all over the Americas and the Caribbean given new attention by the popularity of celebrity status and reality-TV surroundings (perhaps too much sun is to blame). While the decorative arts in Latin America and the Caribbean have long favored a Baroque sense of accumulation and re-accumulation, layers upon layers of references and appropriations, and a rhythmic melding accompanied by musical overtones, its features go beyond the decorative affecting the Fine Arts as well. The association of the Baroque artist with the inclination to enter into the multiplicity of phenomena, into the flux of things in their perpetual becoming, is still applicable in a city like Miami which recognizes and supports an aesthetic process in which compositions are dynamic and open and tend to expand outside their boundaries, or pretend to expand. The artist with a Neo-Baroque sensibility, so popular in Latin America and the Caribbean, celebrates the invention of artistic forms befitting each one’s own cultural heritage in syncretism with the many others that came together through conquest, contact, and colonization. It represented a period of international dialogue and the effervescence of artistic exchange that resulted when original forms lost their national characteristics and were absorbed into a new environment—described by the Europeans as “tropical,” “exotic,” “the other,” and most often and wrongly, “primitive.” Nevertheless, the variety of artistic endeavors that occurred from the early years of such international and national discourse, would leave its mark on artistic production throughout the so-called “New World,” of the Americas. Now Miami is the “New World” with its own aesthetic, cultural syncretism, and distinctive attitude toward the production of art. Just as the early years give rise to an environment of fertile imagination and contradictions that persists to the present day, its attributes cannot be overlooked when considering an artist like Carlos Luna. To place them within the present discussion, look at one of Luna’s most monumental and significant compositions: El Gran Mambo (The Great Mambo, 2006). The impressive canvas tells the story of the artist’s journey through Cuba, Mexico and the United States with the pictographic character that becomes his alter-ego, guide, and spirit helper. Its rhythms determined by the music Luna listens to constantly as he paints, El Gran Mambo refuses to be stopped or restrained as he strides through an overgrown forest of leaves and vines, surrounded by the ghosts of the past and the hope for the future. Replete with his own symbolic repertoire that combines and accumulates within the denseness of imagery, reflecting the many layers that life itself contains, the work is more than an expression documenting the artist’s personal quest, it is also a visual dictionary with each word, letter and abstract design defined according to the graphic expressions he uses throughout his art. As much as it chronicles the artist’s life as he marches forward in his modernistically flattened form, El Gran Mambo serves as an introduction to the key elements that are a constant presence in Luna’s work: the hatted peasant, the coffee pot, the floral vegetation, the countryside, musical rhythms, and other iconic symbols of Cuban culture. Almost a decade after the creation of El Gran Mambo, Luna continues to work referentially as he expounds upon the symbolic elements of this narrative through the exploration of new media and new forms of communication.

For every discovery, Luna not only solves pertinent visual problems, he also applies his technical and stylistic acumen to inventive approaches to the material. Moving from painting and the relative simplicity of such plain two-dimensional surfaces as hand-made paper, wood and canvas that are key to his success, never satisfied with their popularity and acceptance, he methodically studies the potential of ceramics, dependent and respectful of the five-hundred-years-old traditions of Puebla Mexico’s Talavera workshops. Replete with swirling organic designs and an elaborate process limited to specific colors and natural clays and glazes, highly regulated by tradition, Talavera ceramics are produced with a reverence for materials that persists today. This same respect for materials and specialized processes informs the ceramic works of Carlos Luna, now adapted for his personal Cuban vocabulary and motivated by the experiences of his own rural upbringing and pride not only for his own identity, but as an inspiration for others searching for theirs. The limited space for design in the ceramics provides an opportunity to focus on specific symbolic elements, deconstructing the complex surfaces of his other familiar two-dimensional works on canvas and paper, still determined by his heavily outlined pictographic approach. Produced by the famed Talavera Santa Catarina (Puebla, Mexico), which masterfully translated his designs into the fragile and carefully proscribed ceramic objects, Luna’s forays into the art of pottery objects continue ideas representative of his willingness to section and obscure the human figure and other patterns for the sake of such purely formal concerns as line, edge, color, balance and harmonious composition—the same attributes that define his paintings. There is no doubt that Luna has made a major contribution to the art of today by elevating the aesthetics and common craftsmanship of ceramics to assume new roles as Fine Art objects.

Constantly exploring and experimenting as he transforms materials through new technical processes, Luna has also found that his pictorial ideas change with each material as they take on a life and identity of their own. Perhaps best symbolized by the incorporation of airplanes into many of his compositions, the strategy to manage creativity by moving outside the ordinary and familiar comfort zone of his accomplishments, has allowed Luna to treat ever-appearing life experiences through new visual narratives and new materials. The airplane is a key image in his visual vocabulary, laden with symbolism associated with the journey into exile, and the flights of imagination that preoccupy the artist and reveal themselves in a diversity of ways determined by the media. Elegant drawings made with a carefully controlled patina and aluminum leaf on steel mirror the designs on ceramics, and transform surface textures for new textural effects. In his characteristic way of deconstructing and fragmenting the key images in his repertoire, Luna adapts the sheen of metals to further enhance the individual elements as independent abstractions.

An opposite approach to such abstraction and deconstruction of his designs appears in the newest material that he has begun to work in, tapestry. The potential to reimagine his figures and nostalgic references is evident in the tapestry series, which was a challenge for the artist, as he interpreted his drawings digitally to be fed into a mechanical loom that weaves the fibers into remarkable new fabrics with his signature designs. The series references Ife ritual of Nigeria, brought by the African slaves to the Caribbean with the Yoruba peoples and an important part of diaspora symbolism. Present in communities in Cuba and South Florida, the complexity of syncretic imagery mirrors the degree to which it has manifested itself as a part of local Miami culture. Within the tapestry’s details and layers of fibers, his designs animate another surface texture with their jacquard effects enveloping familiar images for new effects.

The work of Carlos Luna combines numerous references and a diversity of media in rhythmic designs that capture the personal experiences of a journey into new world culture, while never losing sight of the origins of their creation.