The Unsettling Art of Carlos Luna, or The Naughty Boy’s Tricks 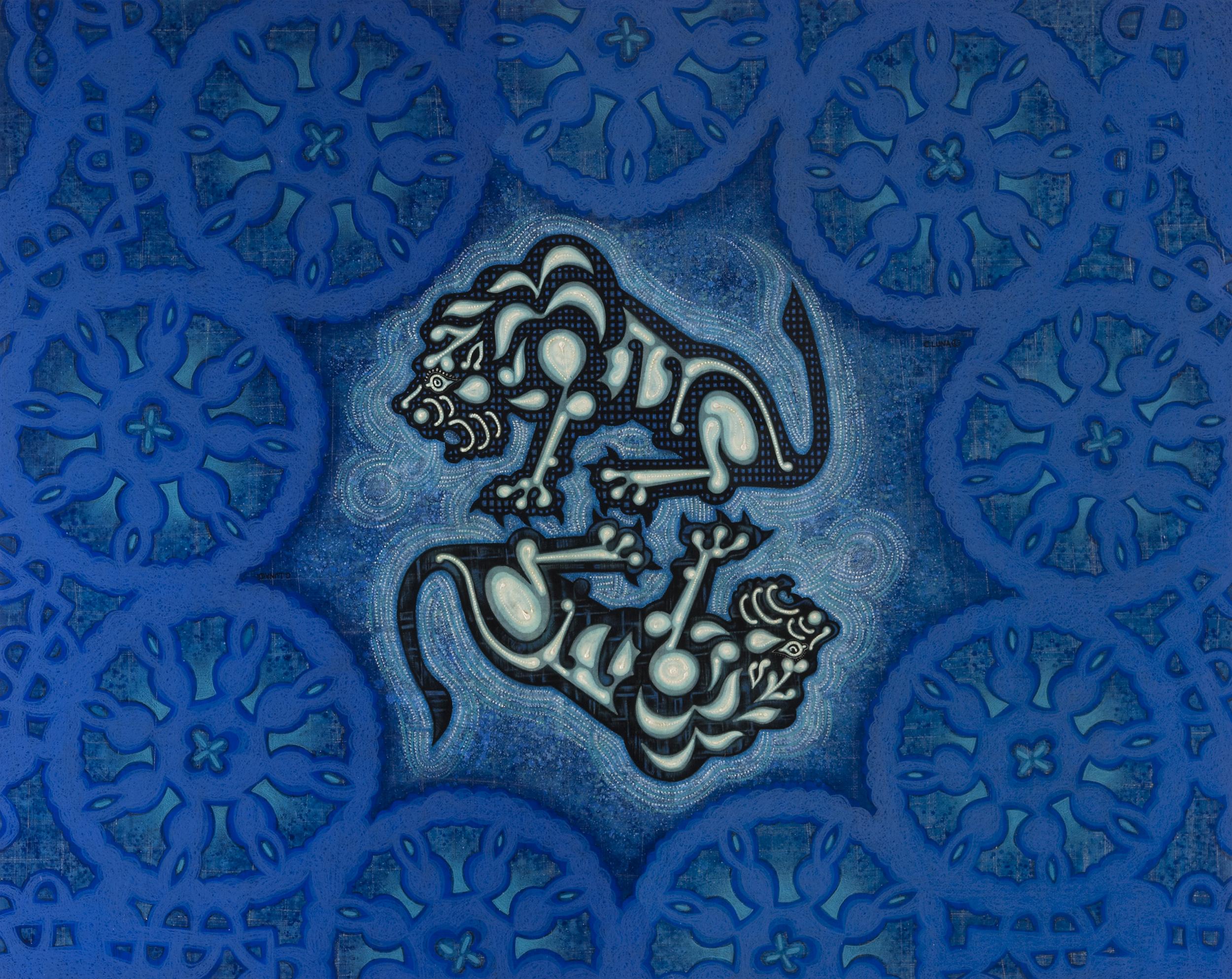 For a work of art to achieve the rare quality that allows it to be considered a classic it must be the result of the mastery of a craft possessed by the artist who created it. Throughout the centuries, artisans of successive civilizations have accumulated the knowledge acquired in the workshops in which they labored. Thus they progressively created the crafts that enabled them, at their height, to obtain a level of perfection that made it possible for certain works to be appreciated not only by individuals within the culture they were created in, but they were also capable of communicating their sense of beauty to members of cultures other than their own. Therefore, the classical character of a work lies in its ability to move any human being to resonate intimately in its presence and to experience aesthetic emotion regardless of what culture it comes from. What makes it accessible to the greatest common denominator of human beings is the sense of beauty itself.

Outside of any circumstance and time, there are works that transcend cultural barriers and the greatest lengths of time, provoking that very emotion accessible to all members of our species which timeless beauty produces. Each and every one of us is gifted with this ability. When the uncouth Extremaduran conquerors stood in awe before the Aztecs’ precious metalwork, architecture, and transformation of bird feathers into art, nobody had to explain the value of these works to them because their objective level of beauty made them speak for themselves. That is the greatest quality of a work of art: to fill ordinary mortals with wonder. Only the artist who has acquired a craft that allows him to translate into a universal language what his personal vision is capable of producing, or giving birth to, can achieve this. The artist must offer his entire life to this effort. In the contemporary art world there are few artists that dare to do so. Carlos Luna not only dares to go against the current of his times by taking on this enterprise. With his natural talent, full of grace, he instills the poetic charge necessary for a painting to transcend craftsmanship so that, on the basis of its excellence, it can be considered a work of art of lasting value, with repercussions above and beyond the commercial contingencies that have devastated the art world.

Various traditions come together in these works. This artist’s universal culture enables him to reference an entire past—from the illuminated manuscripts and great tapestries with their cosmogonic and apocalyptic themes, destined to be displayed over the lecterns of choirs and sacristies and hung from the walls of medieval cathedrals, to the simplicity of Greek ceramics or the prehistoric Venuses found on the Cyclades in the Aegean Sea—without ever failing to mark his works with his unmistakable seal of originality. There is something of the parietal figures of the caves of Altamira and Lascaux grafted onto certain of his characters that seems to come out of modern comic books and to scamper jokingly across Carlos Luna’s paintings. His passing through Mexico, before settling permanently in Miami, is noticeable in how he uses decorative motifs infused with his early childhood memories of Cuba.

According to Nietzsche’s parable of the road that leads to artistic creation, for an individual to be capable of producing an original work, he needs to go through three successive stages: first he turns into a camel, then a lion, and finally a child. In the form of a camel he carries the entire cultural heritage of the past on his back. Subsequently, he must turn into a lion and drop this entire load once and for all with a resounding roar. Only then can he gain access to the primal state in which he can fully enter into the eternally renewed creative play of childhood. Every artist knows that the deepest root of his work lies in that fertile terrain where he took his first steps and first opened his eyes to the wonders of the world.

The child that was Carlos Luna embodied his fantasies both in particular family objects of his parents’ house and in the world outside: those streets of his hometown where the characters that have forever abounded among the ordinary people of inland Cuba wandered. Doing away with the boundaries between the world of plants and animals—including our own species—and the world of artifacts that are the curious fruit of human ingenuity, different beings from his own imagination inopportunely celebrate various forms of unnatural coupling. Marginal characters turned into translucent rumba dancing skeletons display complex orthopedic devices embedded into their improbable anatomies. Like the phantasmagorical recurrence of Marta Hueso as a devouring machine: a certain thin old geezer that satisfied—furtively but efficiently—the desires of frustrated teenagers. Marta Hueso becomes the protagonist of a thousand adventures interwoven throughout the secret passageways of the labyrinths of trees that populate these paintings. Hidden among them, a supposedly adult Carlos Luna challenges us with an irreverent laugh from behind the mask with which, taking wise precautions, he hides his unfettered and eternal early youth. Perhaps he acts this way so that we don’t hold him accountable for the enchantment which, without even asking us for permission, he imposes on us for simply viewing his works.

In these figures that spring from the feverish insomnia of poets, bone turns into an outrageous meat-grinding machinery. A galloping cannibalism infuses life into this hullabaloo of human body parts mixed with the household objects that instilled in his mind an atavistic fear, the fear we all have of being devoured by what most fascinates us: the unknown, that which pulsates surreptitiously within certain things, watching for the right moment to jump on us from behind. It swarms, throughout these landscapes of some as yet undiscovered continent, the unrecognizable tongues and grooves with the improbable, hybrid fruit of an illogical coherence, as though born under the effects of some mushroom brought over in the pouch of a Huichol shaman. So that even the receivers of old telephones become eyes. These things observe us while we innocently believe we are looking at them.  Here a constant battle is taking place. There is war, but it is a Flowery War, like that of the old Mexicas, ordered by noble rules of chivalry based on a theology pervaded with the sacred sense of the principles that rule Mother Nature herself, font of all wisdom.

All of these spaces are animated by the ghostly phosphorescence of diverse spiritual beings brought to life by the labor and art of the accuracy of his drawing. The alchemy of the precise craft which that lone horseman rides, moves the four legs of an articulated beast that escapes in an obsessive race toward a fleeing horizon, prolonging the appearances of reality further than what we would have thought possible to expect. Different figures dance to the sound of the whispers of the countryside within a labyrinth of suspiciously symmetrical motifs that, like those six-pointed stars that make up snowflakes, structures the fictitious space in which, without Renaissance perspective, the spectator hallucinates, thinking that he enters, flesh and blood, into a completely spectral realm. It is an unexpected recreation in broad daylight of the space we enter when we are imperceptibly crossing the threshold of the twilight state that precedes sleep. Because the animated landscapes that Carlos Luna gives us to view are hypnotic.

This hypnosis is produced in the very suggestion of that fictitious depth through which he invites us to deliver ourselves to the dizzying sarabande where the different creations of his imagination are intertwined and in love. The always vigilant roosters of Osun, the coffeepots, airplanes with something of stray dogs propelled by blades of electric fans, improbable elephants glimpsed in some miniature of the mysterious Mogul Empire of India, carpenters’ saws, mechanics’ screws, our mothers’ and grandmothers’ metallic Singer sewing machines, with their strange floor-pedal and that ominous, ever-present vertical needle. Snakes, jellyfish, enchanting damsels and lewd peasants, coffee cups, signs with crude language, national flags, emblems of two of the warriors, be it Ochosi or Eshu, powerful hands with a saint at the tip of each finger, the African Seven Powers, Oggún Arere’s machete, lions, Chango’s lightning bolts, severed heads, cowry shells, Oduns de Ifa to predict the future, sacrificial knives, hammers, stools, false teeth, and skulls.

Also present are the ancestral chicherekús of the Congo Tatas, those malignant dolls harnessed to cause misfortune to one’s enemies that have long foreshadowed the drones created by contemporary technology. They are the venerable grandparents of the killer robots that very soon will act as invulnerable soldiers at the vanguard in the copious arsenal being prepared for use in the coming battles unto death among the modern national states in their struggle for world supremacy. Some familiar nameless beasts appear here and there, the lace-like eyelids of their glassy-green eyes blinking amidst the foliage of a jungle of whimsical geometric motifs.

In need of even more space to frolic freely, the fauna that populate these paintings spill over onto Talavera ceramic plates or, experimenting with innovative techniques, Luna engraves his characters onto round metal sheets with acids. Using the digital science that is transforming the world around us, the characters come to life in the sumptuous tapestries woven by Magnolia Editions. In the meticulous drawings where he devises his future works, the precision of the many forms of a single poetic intuition is already visible, lending to all of these works their unique consistency: The same seed that, nourished by his extraordinary capacity for work, germinates in the fertile terrain of his spirit.

In counterpoint to this profusion of countryside creatures that Carlos Luna’s prolific imagination so abundantly bestows on us, springs forth the strange aesthetic emotion that moves us. A music played by bamboo flutes resounds, along with the rhythmic striking of keys made from the precious wood of colossal trees of ancient tropical jungles that covered the island of Cuba before the arrival of the Spaniards, wrapped in the sweet melody of marimbas throughout the secret gardens of this enchanted world. Like a new form of beauty produced by his work, to enrich the drastically impoverished panorama of contemporary art.